Racism is cancer. It is cancer that impacts many people here in America. Lots of folks don’t even know they have it, but it’s there. Oh yes, it’s there.

Most people by now are familiar with the analogy of Black Lives Matter and cancer, but just in case you’ve not heard it, allow me to briefly explain. Saying “all lives matter” as a response to “black lives matter” has been likened to saying “all cancer sucks” at a breast cancer awareness event. It’s the epitome of a DUH statement that completely devalues the intent of the other viewpoint. Unless you were an asshole, you wouldn’t go to a Toyotathon event and scream to the rafters about the superiority of a Kia.

Yeah, I went absurd. Using absurdity to point out the absurd is a thing.

So let’s extend the racism is cancer metaphor. How do we treat cancer? There are lots of ways. And by lots, I mean LOTS. The course of treatment is dependent on the cancer’s type, stage, spread, location, and impact on other body parts, in addition to the patient’s age, ethnicity, health, and other factors. Not all doctors agree on all aspects of treatment, which is why it’s important to not rely on any one health diagnosis, but to “get a second opinion”. While the patient absolutely has rights to approve or deny treatments, the patient lacks the expertise and authority – even with a lifetime subscription to WebMD – to self-diagnose and prescribe treatments. 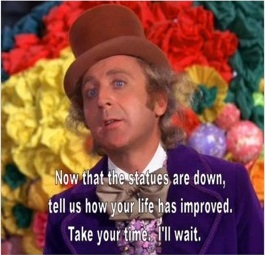 Hopefully you’ve already figured out where I’m going with this. I’m not sure whether you have seen these images, but allow me to deconstruct them in accordance with the metaphor I have been using. Before I start, though, I need to say something. If you see these and agree, you are short-sighted. (Possibly intentionally.)

YOUR LIFE DOESN’T IMPROVE AFTER ONE OR TWO TREATMENTS OF CANCER.

YOUR DOCTOR DOESN’T REMOVE OTHER BODY PARTS UNLESS THE CANCER HAS SPREAD TO THEM.

Seriously, are you an idiot? Really? This is important. Do you not understand that removing institutional racism from our society is going to require small excisions that are uncomfortable and maybe even outside your ability to understand at this current time? The lives of people of color have not been improved by removing symbols of racism from the public sphere. This is but one small step in a long, arduous journey, and it is unreasonable to believe that this one action will have an immediate, marked impact. In fact, for the time being, the lives of people of color may have actually been made worse, because now the racism is in the open as folks who probably had no reason to have any opinion whatsoever about a damn statue yesterday are flying their white privilege flag for all to see today. You want to talk about snowflakes? We didn’t even use HEAT and you’re having an epic meltdown.

Why would the Statue of Liberty even be afraid of anything – other than deportation, because, let’s face it, that lady is an immigrant. The SoL was given as a sign of friendship and has come to indicate welcome and freedom for people coming to America to seek a better way of life. That’s like removing the liver when the cancer is in the ovary.

Please, dear friends and everyone else reading this, if you are offended, genuinely outraged and impacted by the removal of Confederate memorabilia from public spaces, examine yourself and your mindset. This test is a handy way to examine your biases, but I will warn you the results are life-altering. When I took it, I found that I have some biases of which I was unaware, and that shame me, given who I am and what I stand for. However, it isn’t about the biases I have, it’s about how I handle them now that I’m aware I have them. Don’t be so tied to your sense of self as to allow fear and ignorance to fuel hatred towards and misunderstanding of others. Egos in check, friends.

This entry was posted in Uncategorized. Bookmark the permalink.